Back the Blue: A psychological profile of the right

Today I went down to the Justice Center in Portland to see the effects of the protests first-hand. I was not expecting an active protest, but stumbled upon one. There was a pro-police “Mother of All Back the Blue” event, turning out a number of “right-wing” protesters (including Proud Boys and Patriot Prayer) and “left-wing” counter-protestors.

I arrived around 1:00 PM by bike and spotted around 50-100 “Blue Lives Matter” (and co.) protestors, mostly separated from the leftists. 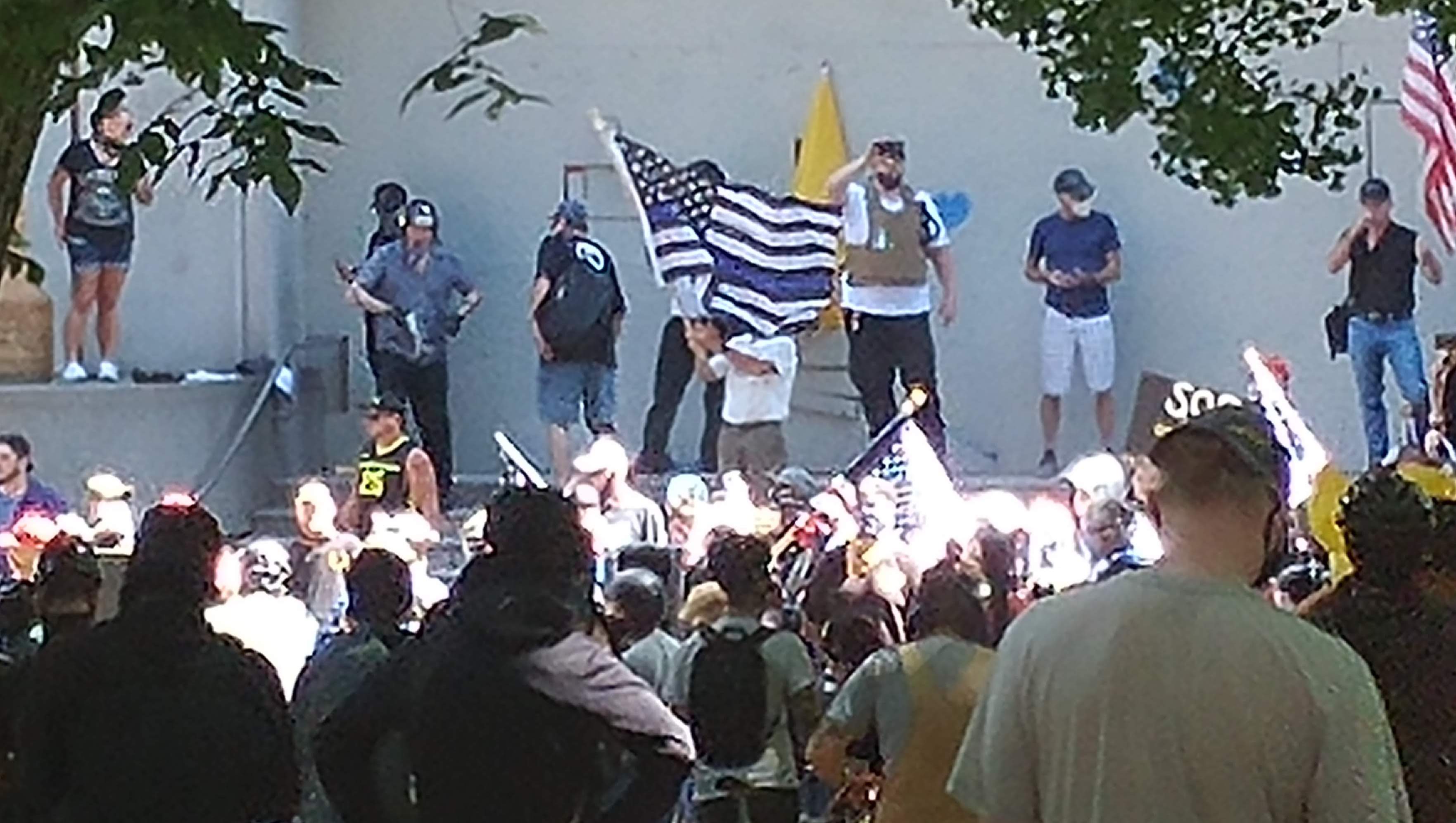 The right had arranged themselves on the steps and sidewalk of the Justice Center, while the leftists faced them from Chapman Square. I mostly hung back, around 200 feet from the line of skirmishes. From here, I noticed people continually ‘retreating’ towards me, ill with the effects of mace.

Who was macing them? Not the police.

I spoke with three people: a man who had been maced, an antifa protestor, and an ACLU “legal observer” – all three confirmed that the police were not involved in these violent skirmishes. In fact, the police were all standing in formation a block away, in front of the police station and in Terry Schrunk Plaza, watching.

The man who’d been maced showed me his broken respirator, where it had been hit by a pepper ball (an impact round that also serves as a lachrymating agent) several weeks earlier. He told me that just a few moments ago, one right wing protester ripped off his mask while another maced him point blank. Again, not the police.

A man carrying mace. Unclear which side he was on. 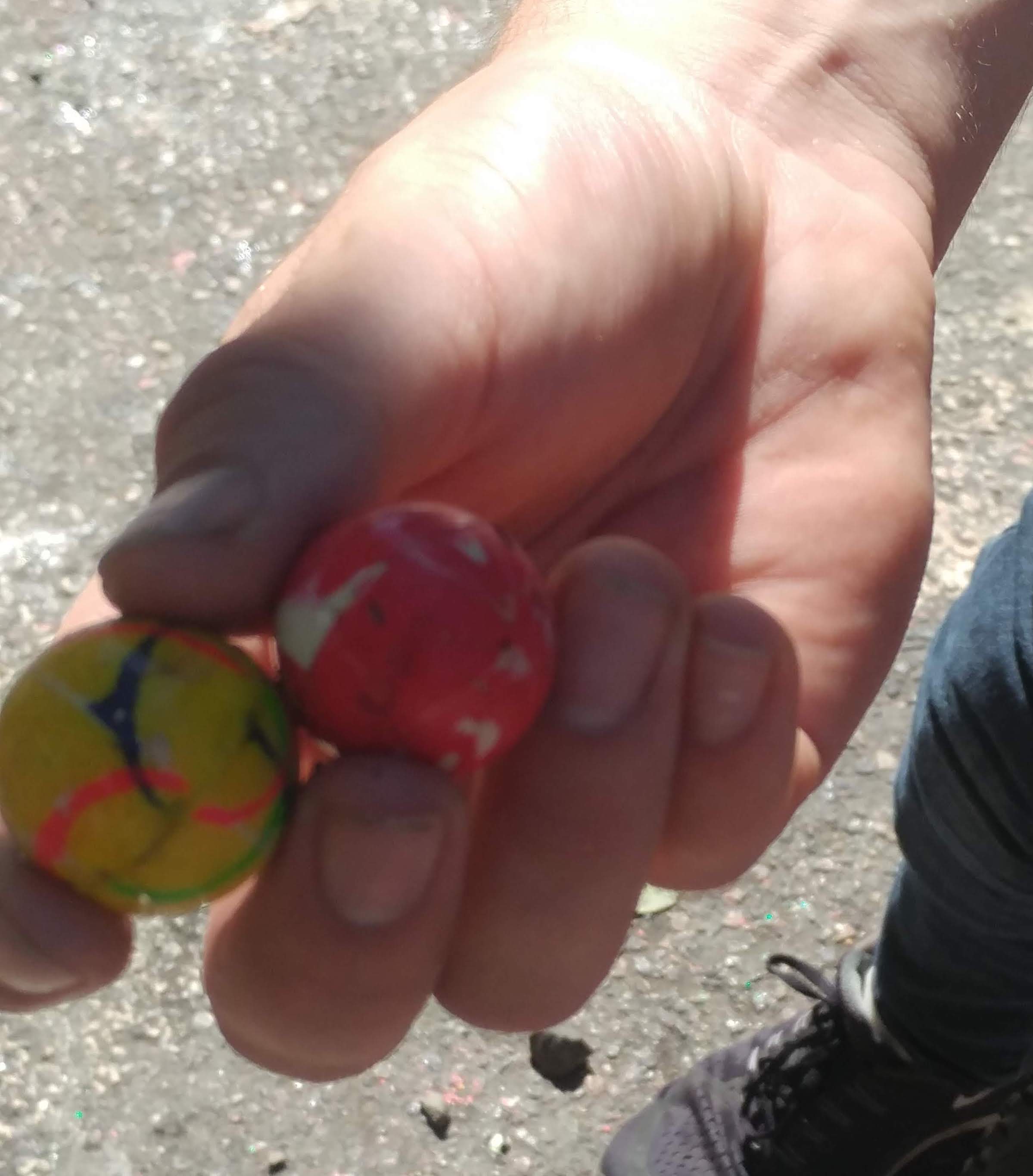 I heard several loud explosions (fireworks) and the firing of paintballs. I saw people with bats, shields, rifles, body armor, even a protestor with a medieval helmet. Every 5 minutes or so, I would see about 30 or 40 people run away from something unseen, quickening my own pulse. It was not clear at what point and how quickly I myself would have to react. I saw one person carried out on a stretcher, and around twenty people who had been debilitated by mace.

I moved in for a closer look at the skirmishing but as I got close, around 2:15, the right wing protestors had begun to move south and vacated the steps of the courthouse. Several Democratic Socialists (DSA) took the steps and gave a quick speech as the leftists largely followed south. 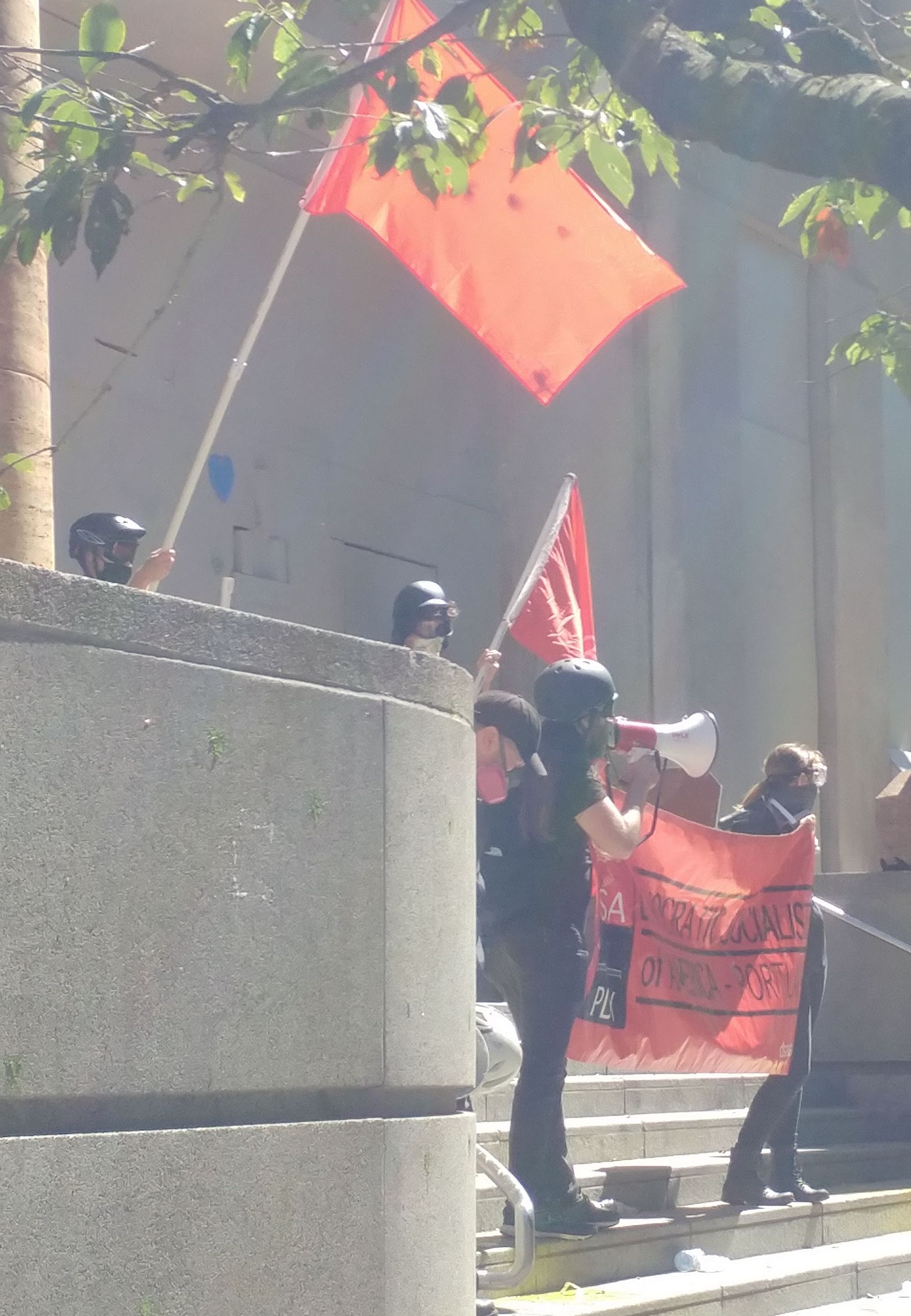 Around 3:00, the protest was declared an unlawful assembly and the police went into action, cordoning off the area and forcing the leftist protestors back into Chapman Square. At this point, I left.

Why do people fetishize the police? If you love law and order, why this preoccupation with its low-level enforcers? Why has the law and order crowd come to imagine the police station as the battlefield against anarchy?

These people are not driven by lofty principles but by reaction - what Dave Pizzaro calls a disgust response. They see in the anarchists queers, drug users, Jews, the disabled, etc. It is not a distaste of anarchism as an ideology they are driven by, but what anarchism will effect: a deeply unaesthetic world.

The first place these reactionaries turn is the institution that has served them so well in the past: physical violence. In the police, the power of the state materializes as violence - physical control over another’s will.

I suppose even cruelty will have a fan club, and adherents will use whatever arguments available to defend their legitimacy. One of the giveaways is how terse they are on tape, repeating the same few phrases:

We’re here to show our support for our brave men and women who serve– who keep us safe. And bring law and order to this.. to this country.

Interesting to note, though, are the unlawful actions of those who claim to be defending law and order.

Now, I won’t assume that the woman in the video belongs to the same ideological group as those QAnon and Proud Boy brawlers, but let’s talk about them as well.

The phenomenon of QAnon, Proud Boys, and Red Hats all following the same talking points is very similar to the ideological conformity of anarchists, communists, antifa, BLM, etc. There is a coalition of ideology on both the left and the right.

I do not mean “left” and “right” in the sense of the economy, but instead “higher” and “lower” on a scale of authoritarianism.

Authoritarianism itself is not an ideology; it is a personality trait. It’s a channeling of cruelty through socially acceptable means. It is the person who yanks their dog by the leash. The bully who grew up to be a cop. The veteran who has himself been abused by fellow soldiers.

What do all of these people have in common? They have been caught and held accountable for their abuse before. Now, they look for a “legitimate” means to express it – one in which they can sate their appetite for inflicting pain, free from the fear of being held to task.

These sadists seek existing pillars of ideology they can hide behind. Existing pockets of power which will come to their defense. “Law and order? Yes, of course that’s what I meant..” But in reality, these people are not principled in any meaningful sense of the word – only cruel.

Here, though, these people enter into a Faustian bargain. The strength they draw from these “legitimizing” pillars creates a need to maintain those pillars. If we defund and de-proliferate the police, these people lose a familiar vehicle for their daily cruelty.

Thus, the most insecure among those power-havers will be driven by anxiety. This is the MAGA crowd. They retain a “legitimizing pillar” of being the President’s fan club, which they hide behind as they approach their embattled “law and order.”

The most cruel will come in with no presumption of legitimacy, other than “might makes right”. These are the Proud Boys and Patriot Prayer – the have-nots of the most powerful caste, white men. You can tell Gavin McInnes had at least one deeply formative rejection where a woman understood him in his vapid entirety, and laughed that his fantasy stretched so far as to include her in it.

The last group - QAnon - are profoundly the most stupid. These are the Dave Rubins - the ‘intellectuals’ who cannot regurgitate the reasoning behind their positions – only, that they remember someone smarter than themselves once defended it.

It does not matter if they can produce a defense, only that they remember one took place.

To them, QAnon is a way of having a smarter person lead them. Of course, they are given a few handy tools to disarm their interlocutors. Most ironically, sophistry: for instance, demanding a college feminist recite Marx.

It is unfortunate that classical liberals get swept up into the right, but these people are morally bankrupt if they betray their libertarian values to collaborate with the Red Hats (the Commander in Chief of the Federal Gummit) just so their taxes don’t go up. But fear not - they were already bankrupt: if they truly cared about natural rights, they would be protesting police brutality as much as any leftist.

The right has living heroes (cops), whereas the left has martyrs. This creates for the left a more symbolic fight. 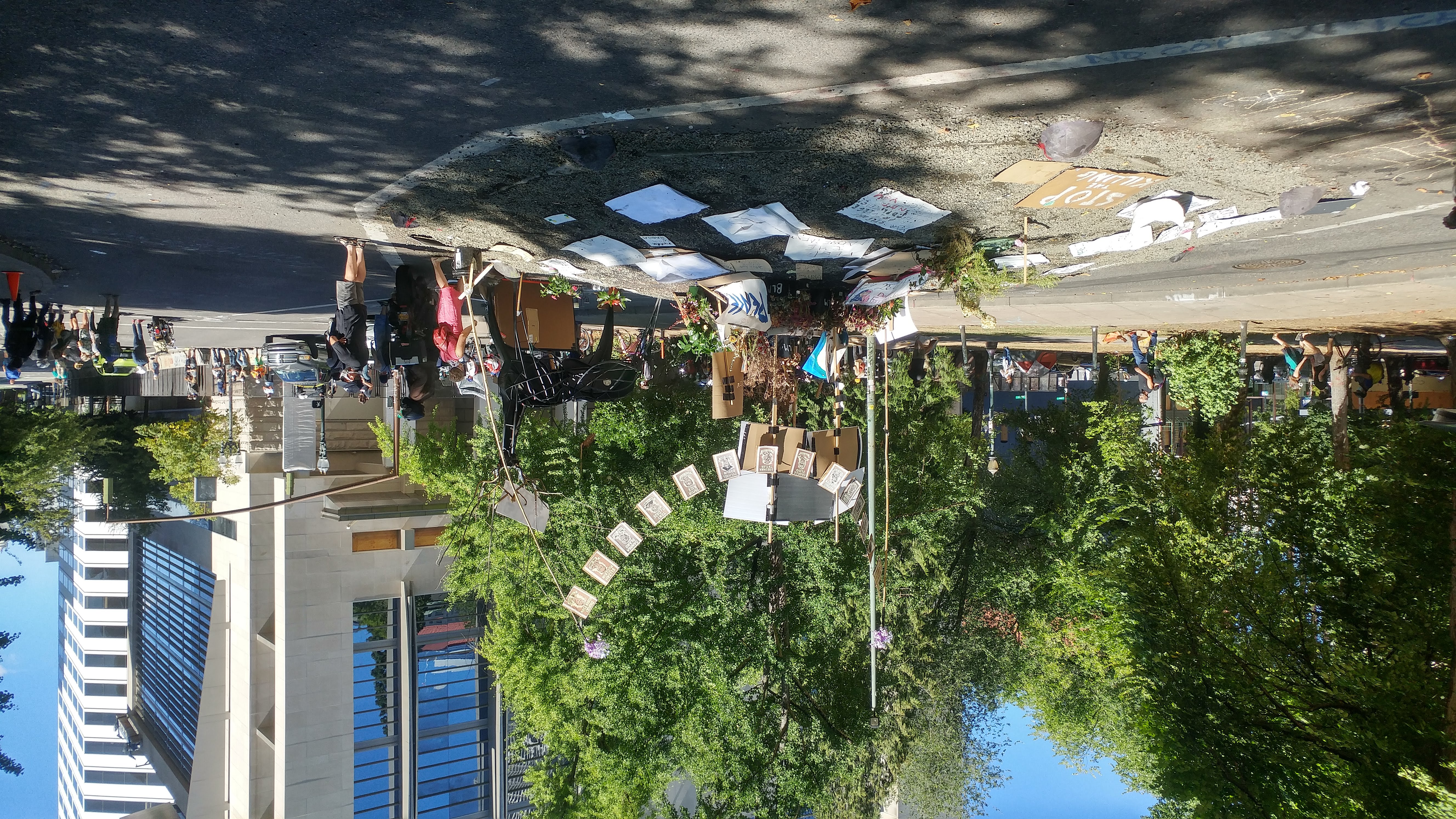 The downside of umbrella ideologies is that they are fractious by nature. To know what I mean, watch this video of Black womens’ condemnation of white anarchist agitators. Where is “the right” breaking apart at the seams? Somewhere that we won’t encounter on Reddit.

On the value of aesthetics

First, what are aesthetics? They are the counterpart to reason. It makes no sense why we find something aesthetically appealing, like a work of art. We can’t craft a formula on what makes something appeal.

“Sure you can,” you’d say, “take several things that are themselves aesthetically pleasing, and combine them.”

Let’s visualize, then, a collage of beautiful works of art. If the collage simply places the works side-by-side, we do not appreciate the aesthetics of the collage, but rather each image.

Let’s create one of those mosaic collages where the images are so meticulously arranged that their size, placement, and color, when observed from a distance, creates a larger picture that exists exclusively in the collage. Beautiful! But in this case, the small images themselves mean nothing - you could distort them and, as long as you preserve the color and texture, the larger picture is just as beautiful. Therefore, this “formula” is gone, since we have made the picture without our original elements.

Also, we haven’t described how this larger picture was ideated in the first place. Sure, the individual elements were used but where did the arrangement come from?

My point is simple: we do not know what makes something beautiful, only that it is. Sure, we can have our theories on its origin, but aesthetics and reason are mutually exclusive.

This brings me to a larger point: why should we value the beautiful? Why did it matter that the Aryans were blonde and good-looking?

To “legitimize” something (e.g. Aryan supremacy) by virtue of its aesthetic appeal is ridiculous if you’re claiming to be representing some universal truth. If your only reason that life should be a certain way is because it’s aesthetically pleasing, you do not deserve any response beyond “your opinion is noted.” There is quite literally nothing to debate - everyone has their own personal taste.

Nobody’s taste is better or worse because taste is devoid of moral value, since there is no choice involved. Aesthetics are the product of the society you grew up in. It’s what people around you found appealing, like the cute girl whose favorite band you started listening to.

Let me illustrate that “there is no choice involved”. As much as one might try to stop being racist, we will always have racist instincts that we must actively suppress. We do not rewrite our aesthetics so that we magically find new people attractive, or new environments safe. Instead, we selectively display ideals based on rational (moral) value to the next generation, so that they grow up surrounded by them, thus turning them into aesthetic values.

Getting back to “the right” – hell, everyone – we should not be preoccupied with the appearance of a thing. We should not treat attractive people as if they were inherently good people. We should not consider America “in decline” if women have beards and an adam’s apple. We should be a little more thoughtful about the nature of things. About how they play into our existing moral structures.

If you’re a natural rights kind of guy, treat each individual as equally deserving of freedom. If you’re a Christian, don’t squint too hard looking for God’s thoughts on the transgendered in the New Testament. If you’re a utilitarian, tally up the numbers of people affected by some unaesthetic motion. We need to spend less time on what something looks like, and more time investigating what it is.